Starting on Dragon Story 1.6, players may notice a frozen blimp floating around the Dragon Islands. This is the Arctic Airship, which takes level 35+ players to a whole new world: the Arctic Islands!

The Arctic Isles can be unlocked by breeding an Ice Age Dragon. Once the breeding has finished, you'll be prompted by Freza (a new character) to jump aboard the Arctic Airship to take the frozen egg to the new world for incubation.


The Arctic Airship is your ticket back and forth between the Dragon Islands and the Arctic Isles. Once you've unlocked the new world, you can always click on the airship and travel from one world to the next.

These islands introduce many new crops, structures, resources, gameplay elements, and dragons for Caretakers to raise.

Currently, there are three new types of dragons on the Arctic Isles: Ice Age, Abominable, and Blizzard.

While it's too cold here for dragons from your original island to be comfortable, they can fly over for a quick stop in the Breeding Den. A few of the dragons in the Arctic Isles require a Dragon Type from the original island to be bred. Dragons from those islands appear in one of the columns when you're selecting dragons to breed. As soon as breeding is finished however, dragons will return to their habitats on their home islands.

Hatching dragon eggs on the Arctic Isles involves a different process from those on the Dragon Isles. Breeding one of these special dragons results in a Frozen Egg, which needs to be thawed using Mystic Flames.

Dragons native to the Arctic Isles have the power to produce another new resource: parts. Each new dragon type produces a unique part, which is used to craft important items such as Mystic Flames.
Mystic Flames can be crafted at a new building called the Fire Mill. This building works just like the Dragon Isle's Spell Shop; you collect parts and combine them together to make something new.

The Arctic Isles introduces 2 storage-like silo buildings: the Fire Crucible and the Frozen Silo. The Fire Crucible stores your collection of Mystic Flames, while the Frozen Silo stores the ingredients you collect from your new dragons. Each of these buildings has a maximum capacity that can be raised by upgrading the building. You can check in the Silo to see how many of each part you've collected so far.

Arctic Isle dragons eat Arctic Isle food, and you can grow it in the Frozen Farm and Large Frozen Farm. Your food total displayed on the top of your screen will only display food from the island you're currently viewing. Coins and Gold work across all your islands though, so those numbers will always be the same. 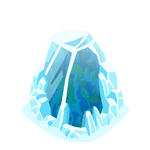 Frozen atop the Arctic Isles, Glacius the Ancient awaits Caretakers who have proven their worth in this cold new world. Collect 9 unique dragons from the Arctic Isles and evolve them to level 10 to awaken him!

Collecting the dragons and earning Glacius the Ancient works just like an award in the Album. You can track your progress by clicking on Glacius, and once you've completed the objective simply click "Awaken" and watch him burst free from the ice.

Glacius doesn't produce coins, you don't have to feed or evolve him, and he can't breed or be traded. He is the ultimate achievement on the Arctic Isles! Glacius is waiting for YOU!

Retrieved from "https://dragon-story.fandom.com/wiki/Arctic_Isles?oldid=189025"
Community content is available under CC-BY-SA unless otherwise noted.