Start a Wiki
watch 01:24
How to Use the Battle Arena
Do you like this video?

*You'll notice a new building floating to the Northeast of your main island if you are level 15+. This is the Battle Arena!

*Players levels 15+ can enter the Battle Arena and select a dragon to compete against the displayed opponent. 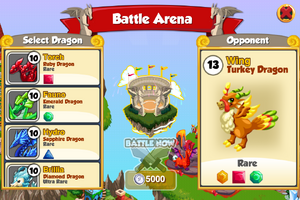 *During a Dragon Battle, players can select from 3 attacks each turn. The battle is turn-based, meaning your opponent will only attack after you do. Every dragon has a magic attack corresponding to their primary element (each with a unique particle effect!), a Bash attack, and the Ultimate Attack.
*The Ultimate Attack costs 12 gold outside of tournaments and guarantees a critical hit. This is for players who want to pay to ensure victory. At other times, the Bash and Magic attacks are your primary weapons. Whether you use Bash or Magic does not affect the final outcome (only random rolls do), so choose whichever one you prefer. 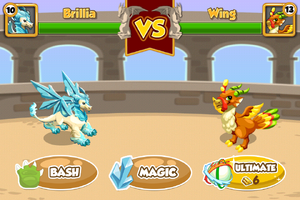 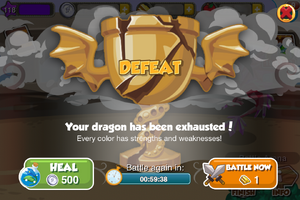 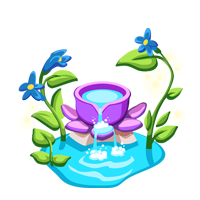 *Winning a match awards you with special crafting materials. What good are they? They can be combined at the Spell Shop to craft exclusive dragons! 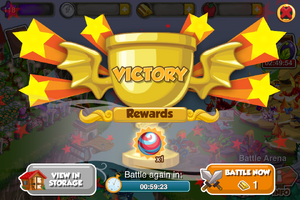 *Your main goal in a battle is to score a critical hit. The amount of damage that your dragon deals is slightly random, which is why you may see some fluctuations in damage between attacks. A critical hit will deal an incredible amount of damage to your opponent. This is why the Ultimate Attack is so effective; it guarantees a critical hit.
*Several factors affect your chances of a critical hit with a particular dragon: your dragon's rarity, the level of your dragon compared to the opponent's, and the colors of your dragon compared to the opponent's colors. These factors do not affect the damage of your normal attacks (only the random number generated by the game does). This is why, if you are lucky, you can win with any dragon, and if you are unlucky, you can lose even if your dragon has stacked up every possible advantage.
*There is a mandatory one hour "cool down" time between battles. This time can be sped up by paying 4 gold or by watching advertisement-related videos (up to 3 videos a day).

Tournaments provide a new and rewarding way to experience the Battle Arena. Before, your dragon opponents were randomized and you had to win 99 battles to craft exclusive dragons. With tournaments, you'll face opponents of increasing difficulty until you go head to head with the tournament boss in the final round! Defeat the dragon boss and win a copy of that dragon. 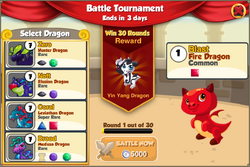 While the tournament is active, the Ultimate Attack costs 30

instead of the usual 12

Regular Tournaments last several days and consist of 30 or more battles, while Flash Tournaments are shorter, consisting of less battles and lasting 2-4 days.

A Regular Tournament is currently active.

The current tournament boss is the Auromantic Dragon.

A list of tournament bosses can be found here.

Aside from the Ultimate Attack, no combination of factors can guarantee a critical hit, even if you use the same dragon against the same opponent. All you can do is try to increase your chances and hope to get lucky.

Remember: Type advantages, rarity, and level only increase your chances of getting a critical hit. They DO NOT affect normal non-crit damage dealt by your dragon (the game makes it slightly random).

To increase your chances, you want to maximize your overall crit score. This is done by balancing type advantages, rarity, and level. You want to achieve the highest score that you can with the dragons that you currently own.

All of your dragon's colors are considered when calculating the type advantage. These will be compared to the enemy's colors. Try to maximize color strengths while minimizing color weaknesses.

There are five different rarity tiers. They are listed below in ascending order of effectiveness.

Common:
Any dragon that the game displays as Common will end up here. A few exceptions of rarer dragons will also be classified in this rarity tier (Virtue and Night).

Rare:
Except for the exceptions in the Common and Unbreedable tier, dragons that the game displays as Rare will be classified in this tier.

Unbreedable:
Any dragon that cannot be bred is classified in this tier regardless of its game-displayed rarity. This includes dragons won from tournaments, dragons received by completing Dragon Album goals, Gold type dragons, and any other dragon that cannot normally be acquired through breeding. Some (but not all) expired limited dragons also fall into this tier.

Super:
Except for the exceptions in the Unbreedable tier, dragons that the game displays as Super Rare will be classified in this tier.

Ultra:
Except for the exceptions in the Unbreedable tier, dragons that the game displays as Ultra Rare will be classified in this tier.

Select your opponent dragon and level, then press the "Find Best Matches" button. This will calculate your chances to win against the selected opponent with the different available dragons.

Having issues using the calculator?