Adventure Leagues are a way to earn new and exciting prizes by playing Dragon Story. You'll start in the Timber League where you'll be introduced to the Bingo board. 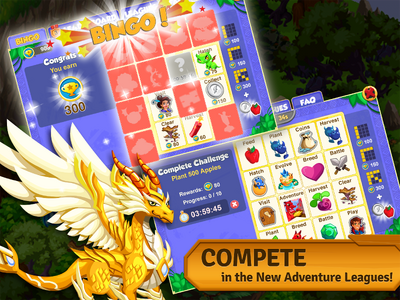 Each board has 16 challenges to pick from. You select one challenge at a time to complete. Come back to collect your Adventure Points once you've finished the challenge. Finishing 4 challenges in a line will earn you a BINGO! Bingos award you a lot of points and give you a new set of 16 challenges. If you're clever, you can line up two, or THREE lines in a row for a double or TRIPLE BINGO!
If there's a challenge on your board that you'd like to change, you can start the challenge and then tap the "x" button next to the timer to cancel it. After a period of time, a new challenge will appear in it's place!

Each time you complete a challenge or successfully get a Bingo, you will be awarded Adventure Points. Challenges are worth different amounts of Adventure Points, so keep your eye out for the big payouts! Adventure Points will help increase your ranking each event. The higher you rank, the better prizes you receive, and the changes of you being promoted to a higher league!

The Adventure Leagues consist of five leagues: Timber, Stone, Bronze, Silver, and Gold leagues. At the end of each event, you have the oppertunity to be promoted to the next league depending on your ranking. As you rise in league, you'll have access to bigger and better prizes!

The Adventure Leagues have introduced the new Boosts! Boosts can be collected and used to speed up the timers on Breeding Dens, Farms, Evolution Temples, and Nests! Each Boost has three different speed increases: a 2x speed boost, 5x speed boost, and a 10x speed boost! You can activate a boost by selecting the building and a new HUD button will appear at the bottom of the screen. You can select which boost you would like to apply. Boosts apply to ALL your buildings of that type! So if you have 7 farms, and use a Farm Boost, it will work for all 7 farms!

The Ticket Temple can be purchased in the Market for coins. Earn Adventure Tickets to trade in for your favorite new prizes!

1 of 6
Add photo
Retrieved from "https://dragon-story.fandom.com/wiki/Bingo_Adventure_Leagues?oldid=300151"
Community content is available under CC-BY-SA unless otherwise noted.