To part ways with a dragon a caretaker will use the Dragon Portal (previously Trading Portal) to send them off onto their own adventure. The dragon will leave the caretaker and Island but leave behind some Essence. You can then go to the Codex, select a new dragon, and if you have enough Essence, craft it! 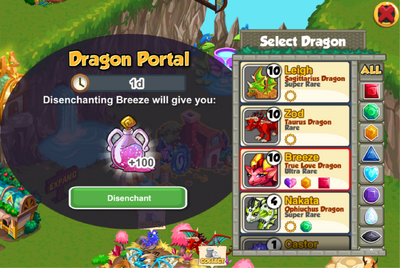 Bonus Essence can be obtained during Leaderboards and World Events! The option for bonus essence will appear once caretakers have bred the needed dragon for the event. However, the bonus only applies during it's active event. This is advantageous if you breed a duplicate dragon or do not want to participate in the event. 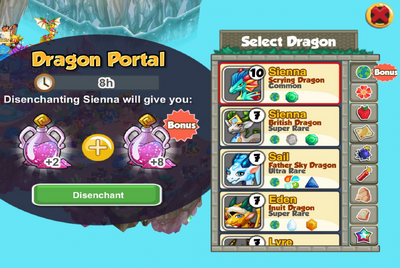 Retrieved from "https://dragon-story.fandom.com/wiki/Dragon_Portal?oldid=318062"
Community content is available under CC-BY-SA unless otherwise noted.