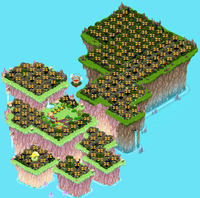 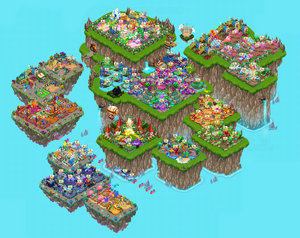 Expansion is the ability of players to add more land to their park. When your park expands, the newly annexed land is filled with obstacles that have to be cleared before the land is useable.

Each expansion costs more coins than the last. After two expansions, a Mystic Map is also a requirement for expanding.

Mystic maps can be requested from neighbors each day. Neighbors can accept your request to give you a mystic map at no personal cost. However, you are limited to one mystic map request per neighbor daily. Since the number of mystic maps required for expansions increases gradually, you will benefit from having more neighbors. If you wish to acquire mystic maps faster, you may also spend

to buy an amount equal to the number of maps required to begin your next expansion. Each map costs 10

. The game will automatically calculate the amount of maps needed for your next expansion.

You may expedite your expansion process with

required to instantly finish an expansion is equal to 10 times the amount of hours remaining, rounded up to the nearest tenth of an hour. For example, if an expansion will take 3 hours and 20 minutes to complete, you will pay 10 times 3.3, which is 33

You might notice that some spaces may not be selected as expansions. These are special slots reserved by TeamLava for possible future island features. When adding new features to the islands, TeamLava may opt to use these slots.

Teamlava Update 12/8/17: "The waters around the Dragon Isles began to bubble as a long-forgotten island emerged from the depths! A magical bridge formed to connect it to the mainland, crafted from an ancient, carved marble stone. How the island rose from the sea will be debated by scholars for many years, but for now, it's yours to explore and grow!" 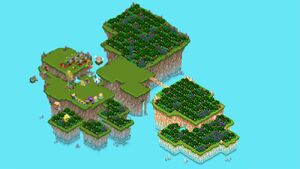 Raw Marble
An abundance of beautiful Raw Marble has risen up from the seafloor with the new island. Baby dragons seem to find them very easily (might have something to do with them being close to the ground). Breeding dragons will help locate these pieces of Raw Marble that can then be used to help explore the new location by turning them into Marble Keys!

Marble Keys
It seems that some archaic magic resides deep within the marble stone of the new island. When formed together and imbuded with magic, the marble seems to help expand the floating bridge and clear the untamed forest from a Caretaker's path. Collect Raw Marble and head over to the Spell Shop to create your own Marble Keys and go claim your Island!

Habitats
Starting at level 80, players will see an increased amount of Habitats they may place on their Island! The initial bump at level 80 allows for 89 habitats (that's up from 72!) and players at level 200 will be able to place 325 habitats! That's a total increase of 85 habitats!!! Improvements
We've also squeezed in a massive performance improvement for Dragon Story. Some of you on newer devices might not notice much, but those of you with slightly older models will hopefully see a great improvement of speed and gameplay!

DISCLAIMER: To provide an optimal experiance, the new land will be released to the public in waves. This helps us ensure that nothing is going wrong, and if so, we can quickly contain and fix it. If you update your game and do not see the new land, DO NO PANIC! You wil get it shortly.

ANDROID: If you play Dragon Story on Android, you'll be coming along for the ride! Just as with your iOS counterparts, the new land will slowly be expanded out to Android players. So if you do not see the new island just yet, DO NOT PANIC! We love you guys too and it'll rise from the ocean floor shortly as well.

*** Note *** Some players will experience different game behavior depending upon an unknown and complicated combination of factors. Players with a fully-updated game may not necessarily get the latest version installed onto their devices. It is not known how to force a device to acquire all the latest install information. Because of this, two separate sections will be maintained, the first for the newest intended version, and the second for versions that have somehow fallen out of sync.

On Oct. 6, 2014 the amounts needed for the first 20 Mining Expansions changed.

Retrieved from "https://dragon-story.fandom.com/wiki/Expansion?oldid=298189"
Community content is available under CC-BY-SA unless otherwise noted.