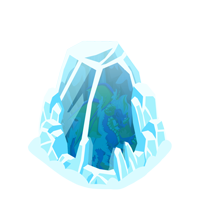 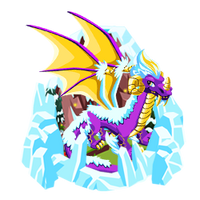 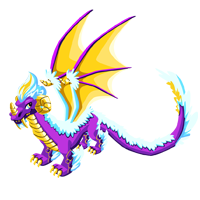 "Dragon historians have investigated the ruins of Giant Mountain Dragons for years. Due to the dragon's colossal size, many assumed the ruins were a hoax; that is, until you woke one up!"

Glacius can be found on the Arctic Isles. He will awaken when a total of 9 unique Arctic Isles Dragons have been raised to level 10.

Collecting the dragons and earning Glacius the Ancient works just like an award in the Album. You can track your progress by clicking on Glacius, and once you've completed the objective simply click "Awaken" and watch him burst free from the ice!

Glacius doesn't produce coins, you don't have to feed or evolve him, and he can't breed or be traded.  He does, however, take up 1 habitat slot on the Arctic Isles.

Retrieved from "https://dragon-story.fandom.com/wiki/Glacius_Dragon?oldid=310294"
Community content is available under CC-BY-SA unless otherwise noted.