This page lists glitches that are sometimes found in Dragon Story. 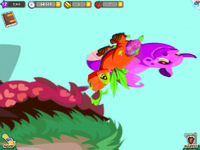 Sometimes, when you open up the game, two dragons and the Breeding Den will be spinning around.

If there is a delay with your game's communication with the server, such as a poor internet connectivity spike, you can perform actions in the game that may be lost and rolled back to an earlier time.

This behavior is most apparent when you put two dragons in the breeding den and no time is displayed - it shows that there is some trouble communicating with the server. You can lose progress such as hatching eggs, putting dragons into the den, harvesting or growing crops, collecting money, buying from the Market, and any other in-game actions.

A good way to tell when the game has caught up to the current state is to collect coins from habitats. When the game has finally communicated with the server, you will see the coin animations play on the habitats that you collected from.

Also related to lag like the Rollback glitch, some actions will not be performed as expected when the game is lagging. You may experience behavior such as empty Message Wall posts that haven't loaded or dragons in the Breeding Den with no progress bar. Also, lag can cause a dragon to stay in its habitats original spot for a moment even after the habitat has been moved.

A good defense against the rollback glitch is to collect coins from habitats and wait until the coin animations play, which signifies that the game has finally communicated with the server. Your previously queued actions should not be rolled back if you manage to wait for the coin animations.

When the game is taking a long time to pull images from the server, you may find that a dragon's image and/or icon is invisible. This tends to happen especially when you get a new dragon form for the first time, such as when you hatch or evolve a newly-acquired dragon species.

Sometimes, a dragon will be frozen and if you click on it, all the others will freeze until you go into their window.

Another way to stop the glitch is to stay off dragon story for about 2 minutes. 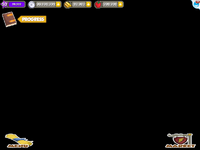 Sometimes when you open the game, the menu and market icons are stretched. They keep like that even when the game is fully loaded. It seems to fix itself after some time.

Sometimes when you breed dragons and get an incubation timer that suggests a particular dragon, when the dragons have finished breeding, the wrong egg will go into the nest. So far, users have experienced this bug with Fairy turning into Fruitful and Trickster turning into Genie.

Sometimes, you may get a dragon with a certain incubation timer and hatch it correctly, but its egg will be wrong. This has been reported to happen with a Planet Dragon hatching out of a Titan Dragon egg.

While visiting a neighbor, it is occasionally possible to see the game menu and buttons display as if you were at home instead.

After expanding a piece of land that appears blank, if you move a building there, you might experience moments later that rocks, trees, and other objects appear on top of the building. This is related to game lag, which tends to happen a lot in Dragon Story.

Sometimes, when you put two dragons in a Breeding Den, there will be one dragon frozen in the air after pressing "Breed". After some time, the issue fixes itself.

Sometimes, when you put a dragon in the evolution temple, the wrong color crystal will appear. This has happened with the Clown Dragon, which occasionally shows a green crystal even though the Clown Dragon does not have a green color.

When a dragon is in the Evolution Temple, its crystal produces a "glowing" effect. If a dragon is flying in front of the crystal, it will actually be drawn behind this glow.

If you select a Farm and click Plant, then scroll all the way to the right and scroll back, the option for planting Buffbeets will be replaced with blank space.

In the Dragon Album all of the stages of evolution for the Fireworks Dragon show up as the Epic version of the Serpent Dragon. (This was corrected on January 10th, 2013)

After the Origami Dragon ad, there is the Tiny Dragon ad. After pressing close in order to exit out of the ad, it is made of blank and black rectangles.

Some times a dragon's left wing (regardless of the direction it's facing) will be flipped 180 degrees. This currently happens to the Dawntree Dragon and the Franken Dragon.