The Mine is located on the northwest side of the main island in a rock wall to eligible leveled players. The Mine has two shafts visible once a player enters the mine. The left shaft unlocks at level 45 and contains parts needed to craft unique dragons . Collect enough of these parts and you can combine them at the Spell Shop to craft the exclusive dragons.

The right shaft of the Mine unlocks at level 80. Here, players can play the Mining mini-game to find Island Parts, which are used like Mystic Maps to expand on the brand new island to the northwest of the main island, near the Mine. Unlike the normal islands, this new island is built as you expand. At launch, there are 10 new expansions to be constructed.

The tools you need to enter either mine shaft are collected like Dragon Summoning parts, from buildings.

will start dropping from the evolution temple. Bombs

let you enter the mine for dragon mining parts.

will start dropping from the breeding den. Dynamite

lets you enter the mine for Island Blocks.

The mines have a max capacity of 25 Bombs

. If you are at the max you will no longer receive Bombs or Dynamite from evolving or breeding dragons until some have been used. However, additional Bombs

can be collected by having one or more Bomb Type or Dynamite Type dragons on your Islands! These special dragons are non-breedable and available only by purchase with gold

collected from these dragons are NOT subject to the usual mine limits of 25!

The new island works just like the main island, once you've expanded, you can move old buildings or build new ones. The new island has been pre-cleared by elite Caretakers so there's no foliage! 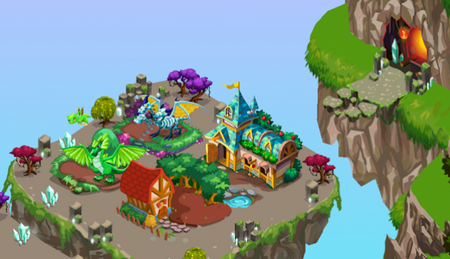 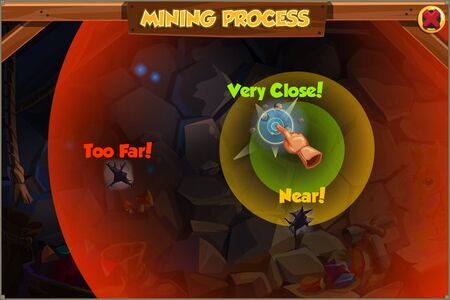 to enter a mine. This gives you 12 moves in the mine. Each tap consumes 1 move. When you make a move, you will receive feedback: Too Far, Near, Very Close depending on your distance to a prize. If you get Very Close, tap around that spot to find your prize.

When you're running low on moves, you can exchange Gold for more without leaving your current mining game. Two refills are allowed, and then you have to start a new mining game.

Retrieved from "https://dragon-story.fandom.com/wiki/Mining?oldid=322897"
Community content is available under CC-BY-SA unless otherwise noted.